A place where religion and faith flourished for centuries 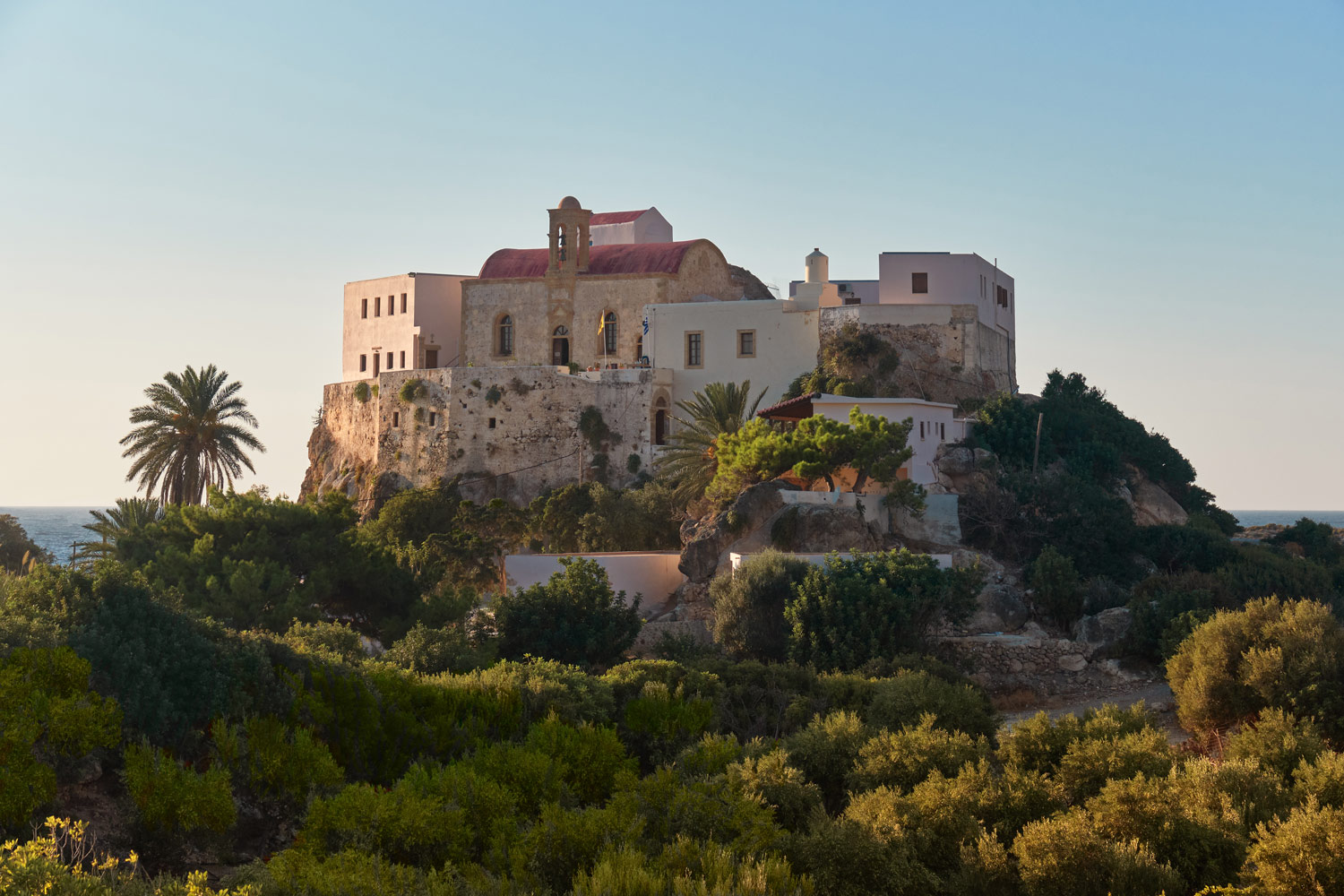 The monastery of Chrisoskalitissa is one of the most known monasteries in Crete. It is located 75 km southwest of Chania city, and just a few kilometers north of the famous Elafonissi beach. It is built on top of a hill overlooking the rocky, rugged coastline of the area on the west coast of Crete. The unique name "Chrisoskalitissa" is in Greek the short word for “Virgin of the Golden Step”. According to the legend, when the Ottomans conquered Crete, the nuns hid the golden artefacts of the monastery under a step in the long staircase of the entrance, to protect them from looting. The “golden step”, as it was called, gave its name to the monastery. The legend also says that the non-Christians and the sinners could not distinguish the golden step among the 90 steps of the monastery, which was only visible to the faithful. 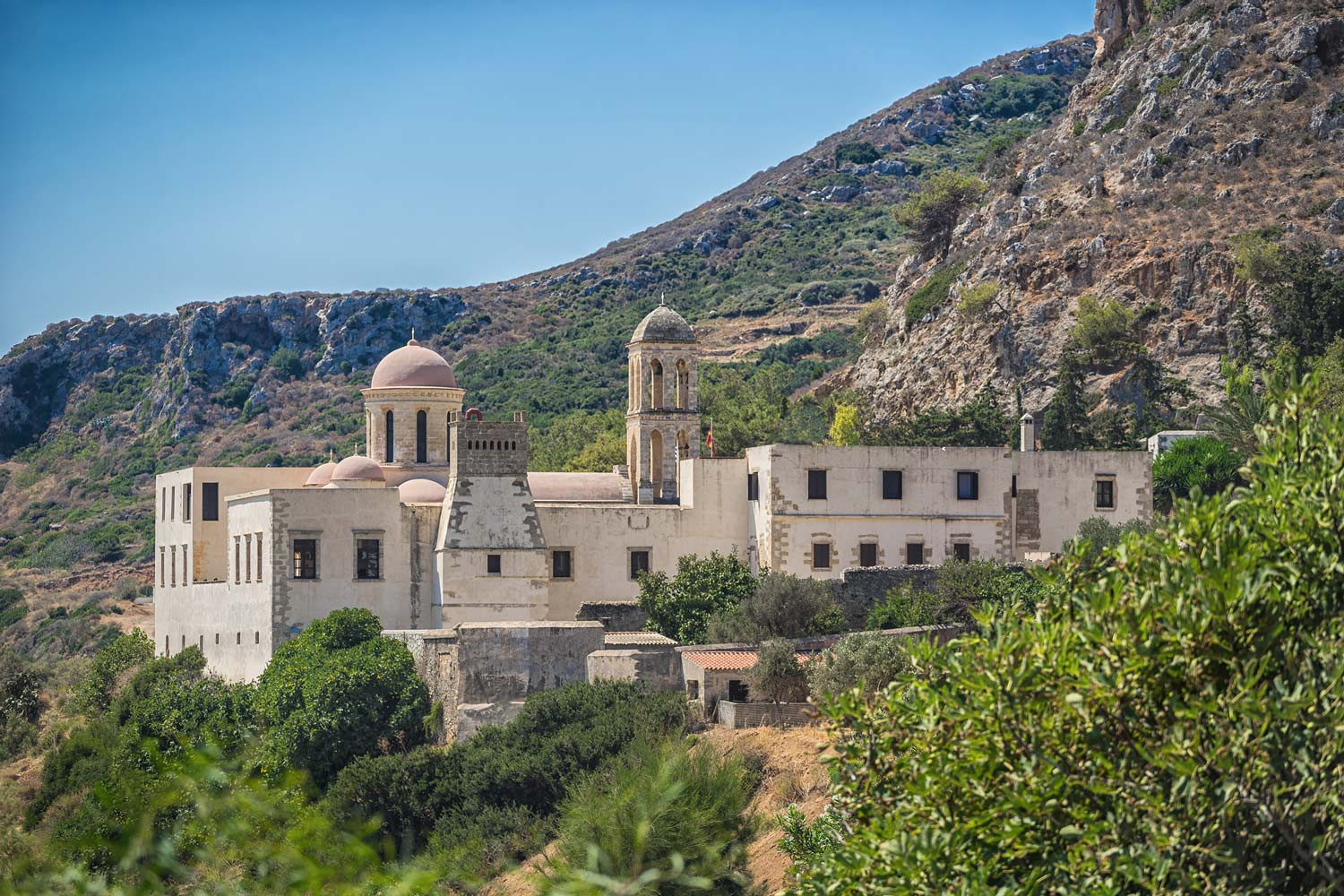 Gonia Monastery is one of the most important monasteries in the northwest of Chania region. Its other name is Monastery of Panagia Odigitria, meaning “Monastery of Mother Mary the Leader” in Greek. It is built just outside Kolymbari village, in a distance of less than a kilometer away. The name "Gonia Monastery" means in Greek “Monastery of the Corner”, due to its excellent location on the south of Rodopou peninsula, which provides ample view to Chania Bay. The distinct architecture of the monastery is complemented by the very interesting Ecclesiastical Museum located inside the monastery. In the museum you can find, among others, icons painted by great artists from the 14th century onwards, and centuries-old manuscripts. During the Ottoman occupation of Crete, the monastery played a large role in the final independence of the island, as it supported and sometimes hosted the Cretan rebels. For this reason it was repeatedly bombarded by the Ottomans, but it was rebuilt every time by its active monks. 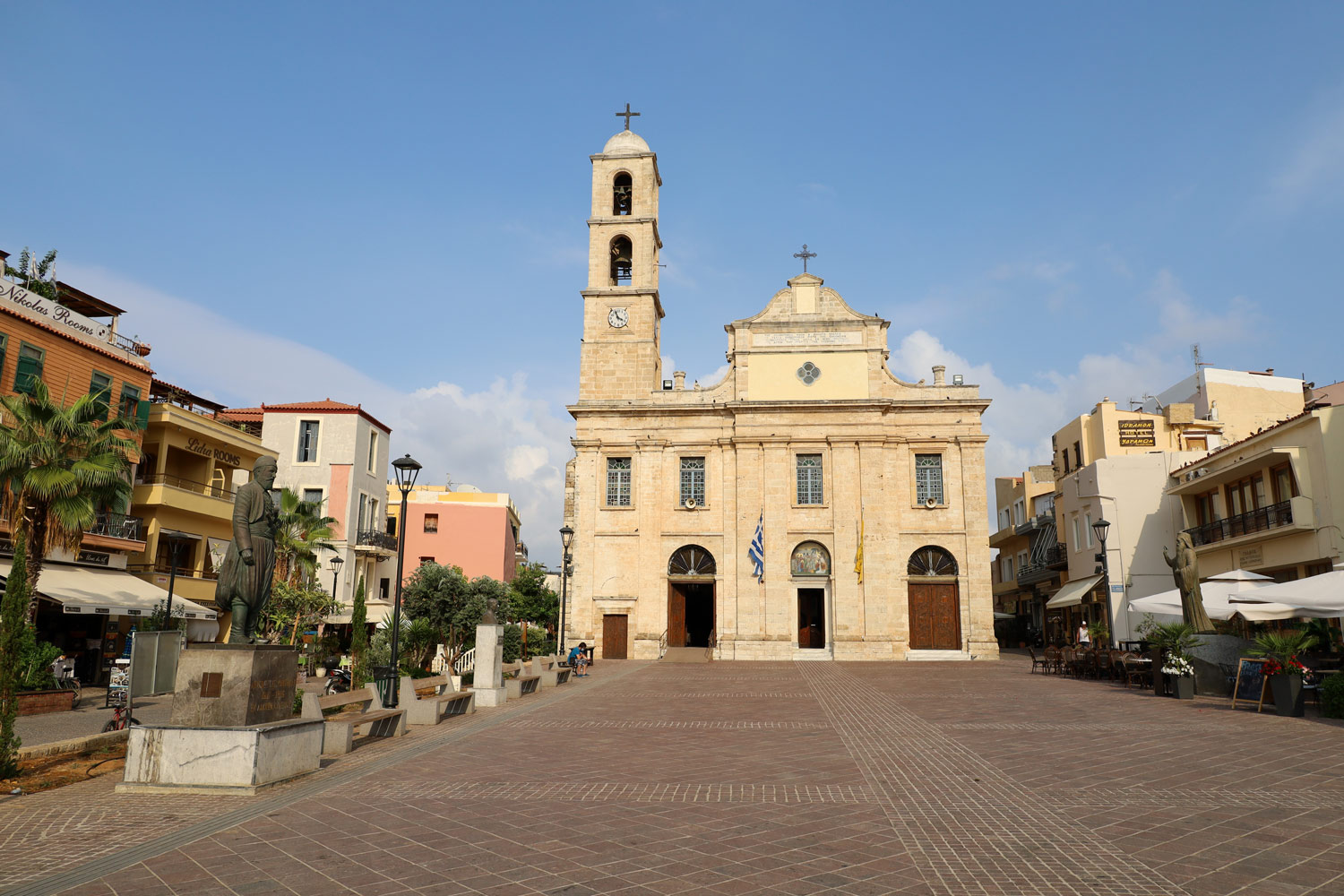 Trimartiri church is the impressive Metropolitan Cathedral of Chania city. It is located in the middle of Chalidon street, the central street of Chania Old Town. In front of the cathedral lies is a nice square with nicel shops around it. The church is called “Trimartiri” (meaning “of the three martyrs” in Greek), due to its three aisles. It is dedicated to the Presentation of Virgin Mary. The first church on the site was built in the 14th century by the Venetians. The Ottomans later desecrated the church and turned it into a soap factory. During that time, on a corner of the building there was the sacred icon of the Presentation of Virgin Mary, and it became an unofficial shrine for the Christians of Chania city. In the middle of the 19th century, the soap factory was almost bankrupt, and there was unrest among the local Christians, who demanded it to become a Christian church again. This happened in 1860, when the present-day Trimartiri church was built. In the years that followed, the church sustained heavy damages in the Cretan revolution of 1897 and again in the Nazi bombardment of Crete in 1941, but each time it was rebuilt to its former glory. 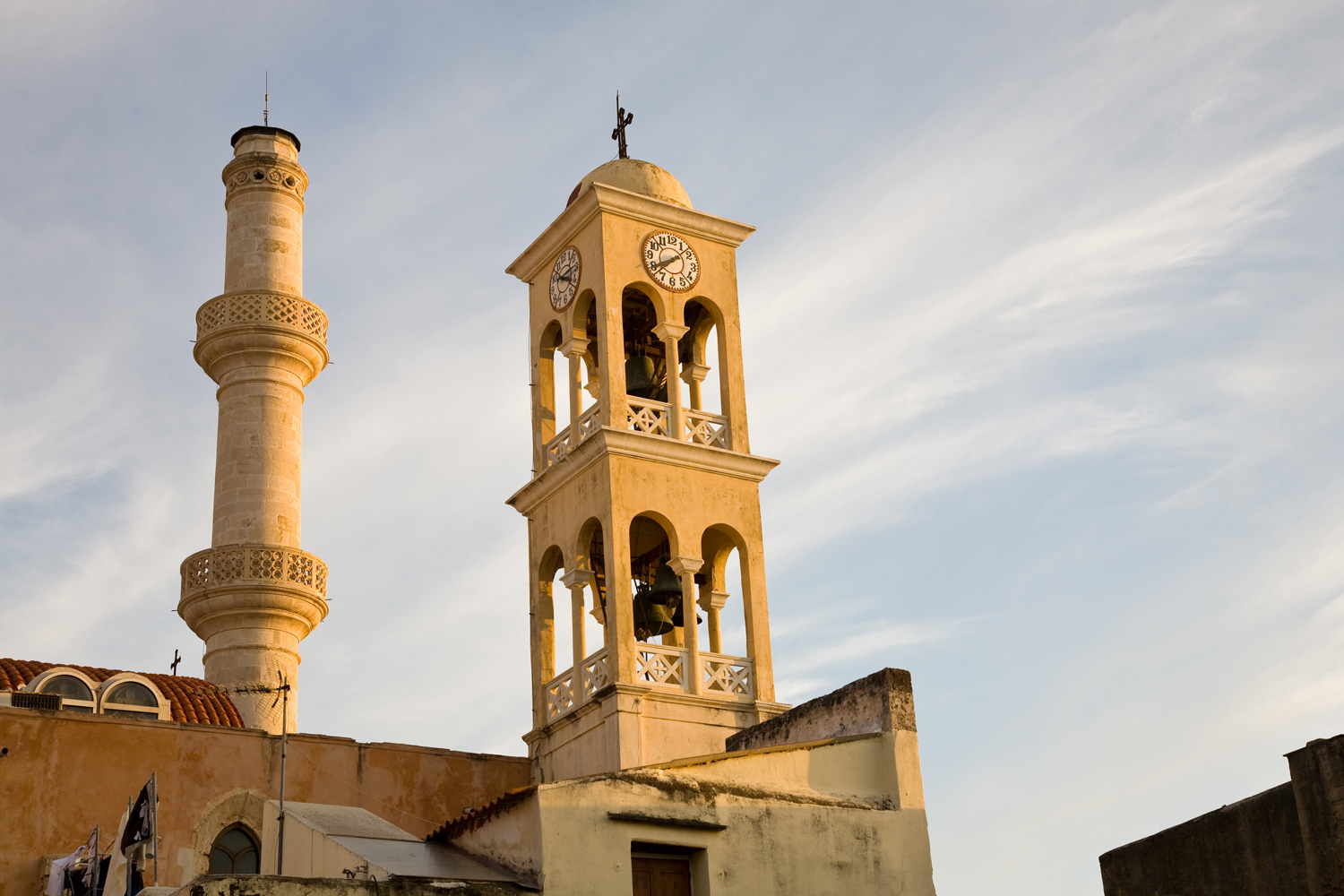 Agios Nikolaos church is located on the side of one of the nicest squares in Chania city: Splantzia square (or 1821 square, as it is officially called), lying in the center of the homonymous Splantzia quarter. In spring and summer, the shady square with the big trees comes alive by the buzzing cafes, taverns and shops around it. Agios Nikolaos church was built between the 13th and the 14th centuries as a Dominican monastery, and this is the reason for its distinct architecture. During the Ottoman occupation of Crete, it was converted to a mosque, like all the other Christian churches in Chania city. It was at that period that the tall minaret was built on the corner of the church, which has been recently restored. The building became a church again in 1918, after the liberation and reunion of Crete with Greece, and it was dedicated to Agios Nikolaos, the patron saint of the sailors. Today, it is the only church in Greece that has both a bell tower and a minaret. And if you are observant, you will also find the "secret" underground fountain, after descending the stairs in front of the church... 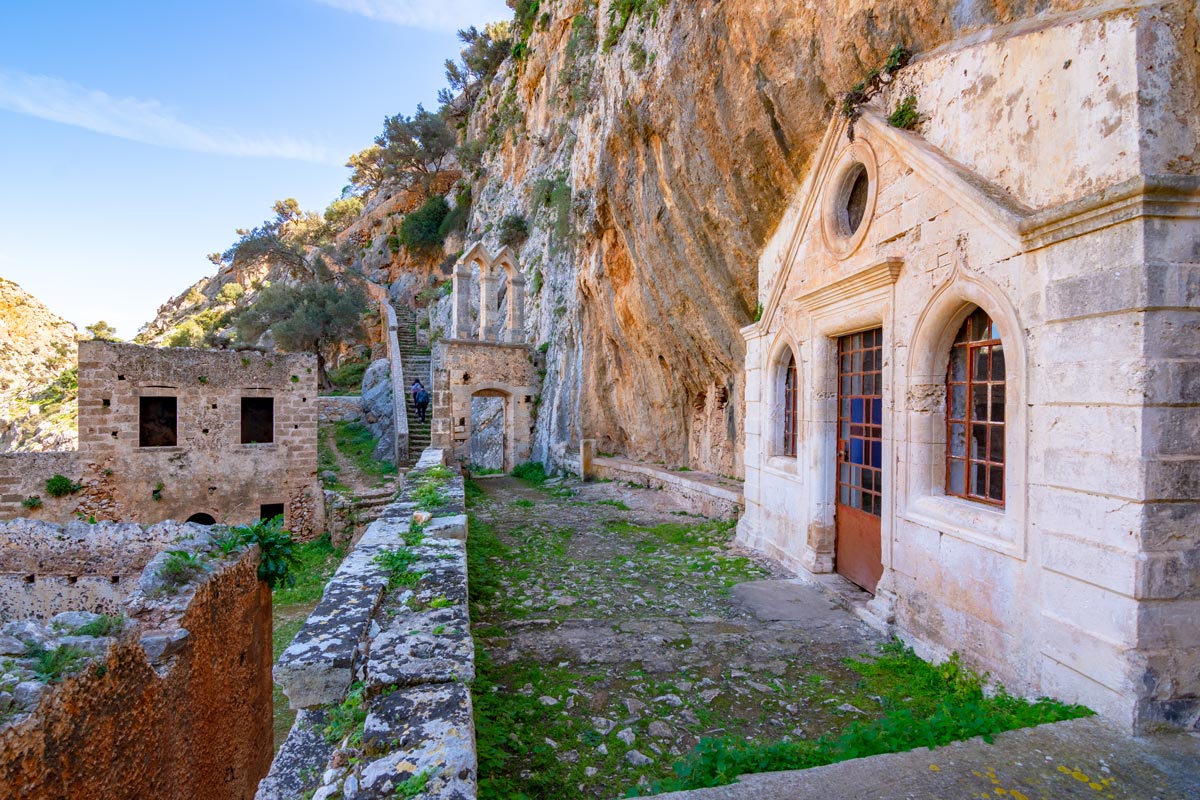 Gouverneto monastery is located in Akrotiri peninsula, just 4 km from Agia Triada Tzagaroli monastery and 19 km from Chania city. It was built in the 16th century, and is one of the oldest monasteries in Crete. The buildings that surround it with thick walls were used as fortification in previous centuries. The monastery was one of the wealthiest in Crete, owning large parts of land in the area. The church of the monastery is dedicated to the Virgin, and for this reason the monastery is also known as Our Lady of the Angels. When you plan your visit to the monastery, please first consult its opening days and hours, as they are strictly followed. 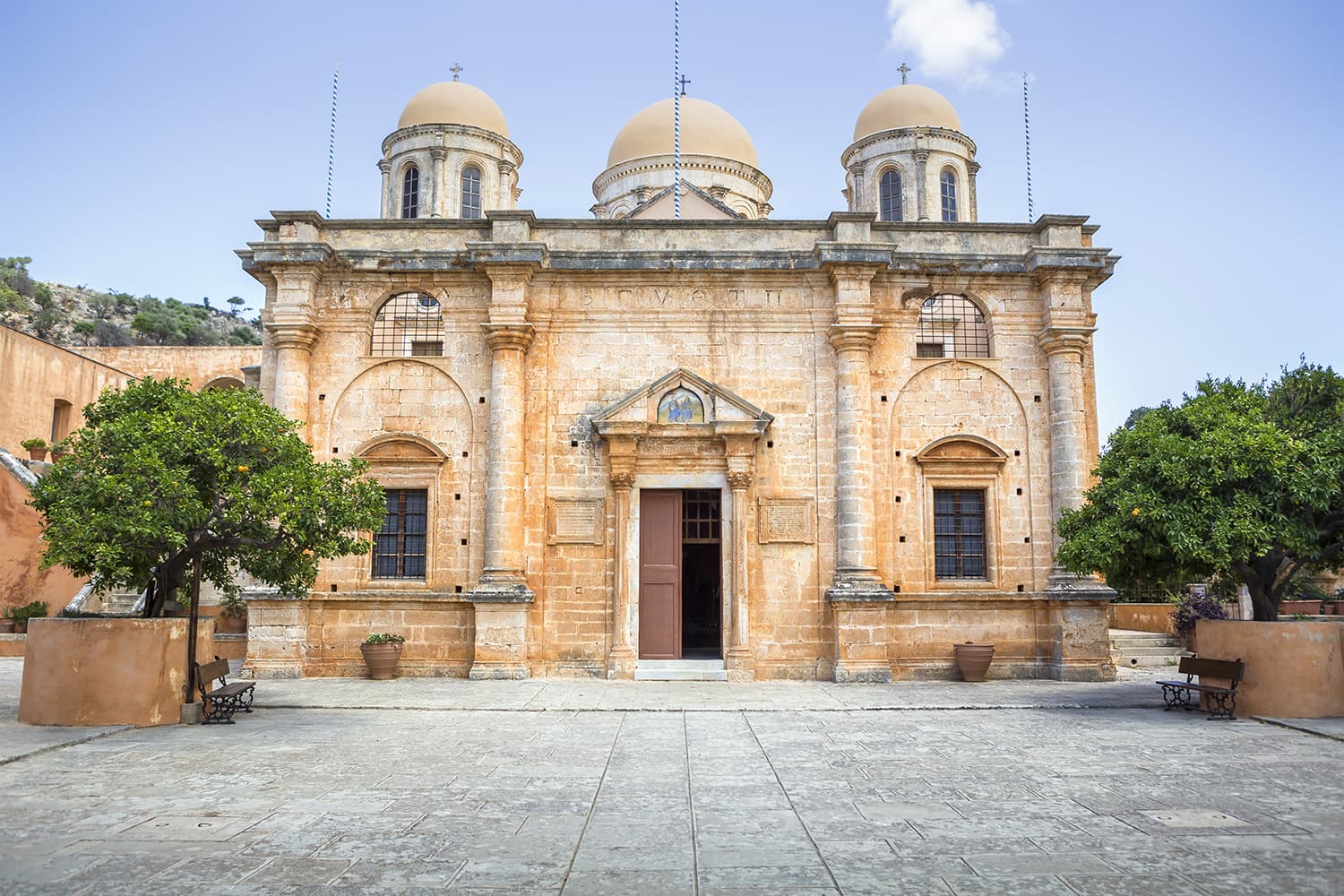 Agia Triada (Holy Trinity) Tzagaroli monastery is arguably one of the most beautiful monasteries in Chania region, located on the north part of the Akrotiri peninsula. It was built in the 17th century by the brothers Ieremias and Lavrentios Tzagaroli, who were monks in the nearby Gouverneto monastery and belonged to a known Venetian-Cretan family with big influence to both the Orthodox and the Catholic Venetian population of the island. The monastery had a prominent role in the history and the education of Crete. The monastery architecture is remarkable, with elements of the Venetian Renaissance era, and with a strongly fortified wall, where you can go up and walk, enjoying a great view to the monastery from above. Maybe the protagonists of the monastery are its friendly cats, which you can find everywhere. In the monastery there is an interesting museum, where you can also find excellent olive oil and wine, produced from the olive groves and the vineyards of the surrounding area, which belong to the monastery. 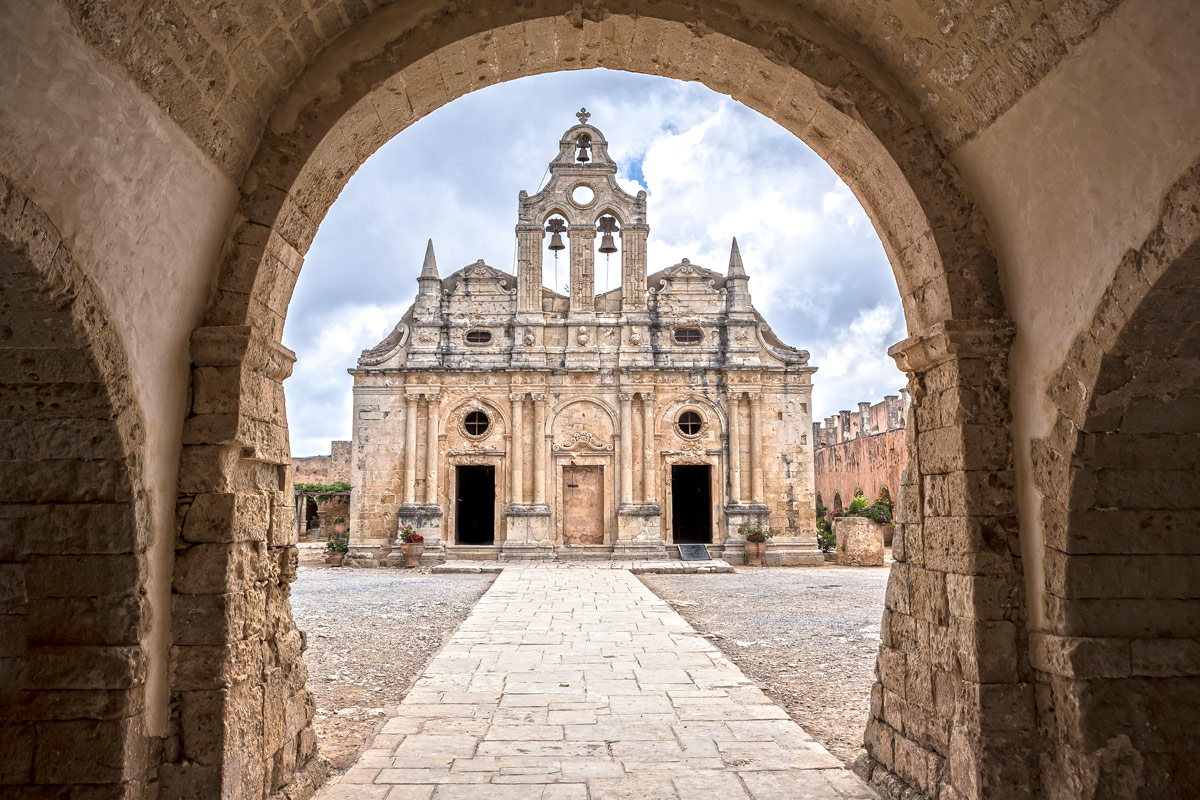 Arkadi monastery is one of the most iconic and historical monasteries in Greece. It is located 23 km southeast of Rethymno city. According to historians, its name most possibly comes from the Byzantine Emperor Arkadios, who founded it in the 12th century. The current church of the monastery was built in the 16th century, and it has exquisite architecture, with Renaissance, Roman and Baroque elements. Since the 16th century the monastery was known as one of the biggest centers of science, art and culture in Crete. But Arkadi monastery became known all over the world, due to a tragic, and heroic at the same time, event. During the Cretan revolt of 1866, 943 Greeks, most of them women and children, sought refuge in the monastery to avoid being massacred by the Ottoman army. After 3 days of fierce and desperate battle between the few Cretan defenders and the Ottoman army, and with the abbot of the monastery leading the way, the besieged Cretans blew up barrels of gunpowder, causing a major explosion which killed all of them- along with hundreds of Ottoman soldiers - choosing self-sacrifice from surrendering. This heroic event caused worldwide sympathy and support for the revolting Cretans and marked a turning point in the Cretan Issue, which after many years finally led to the independence of the island and its reunion with the rest of Greece. 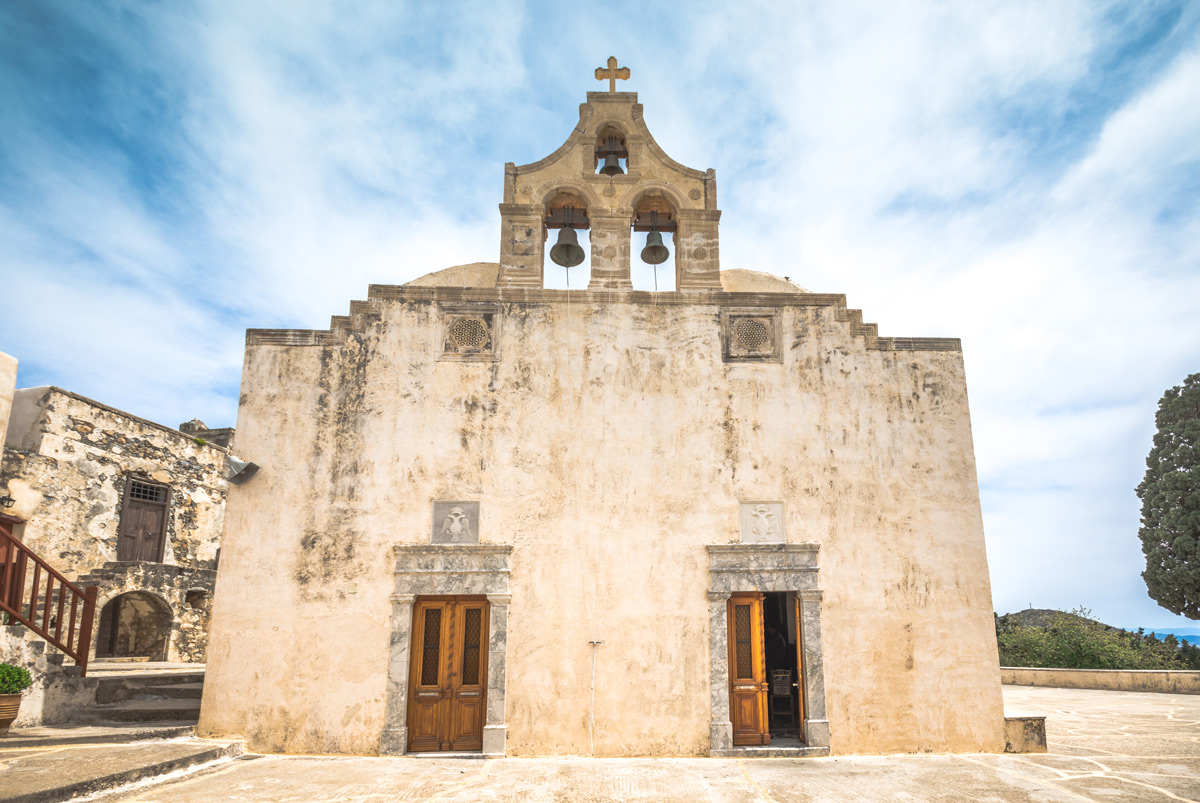 Moni Preveli, or Preveli monastery, is a distinctive religious site, located on the south coast of the Rethymno region, close to the homonymous famous Preveli beach and lagoon. It consists of two different buildings, the Lower Monastery of St. John the Baptist, which is ruined and deserted, and the functioning Upper Monastery of St. John the Theologian. The monastery was built in the Venetian era of Crete by Prevelis, a rich benefactor of the time. For centuries it prospered and was a local center of religion and culture. During the Ottoman occupation of the island, Preveli monastery actively supported the Cretan revolution, and for this reason it was destroyed, but rebuilt again. In World War II, during the battle of Crete, it provided much-needed shelter to retreating soldiers from the UK, Australia and New Zealand. With the help of the Preveli monks, a group of Australian soldiers managed to safely evacuate the island by submarines that approached Preveli Beach. When the Nazi troops found out about that, they destroyed the Lower Preveli monastery. After the war, many of the former rescued Australian soldiers donated for the building of monuments in the monastery, to show their gratitude to the brave monks of Preveli.